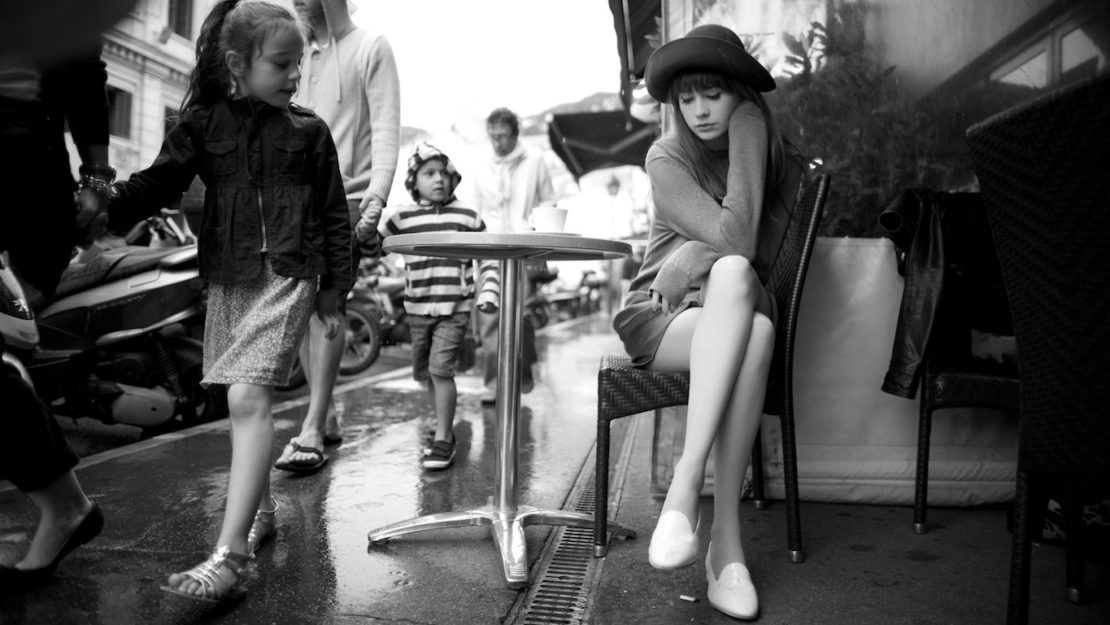 “The British Film Company would like you to go to Cannes as their guest and photograph Karen Gillan”. I’m deep in an edit for a new film project in London and not home in Derbyshire where my kit is. My manager, Mark George continues, “They want reportage pictures of her at a Villa, as well as some street reportage in the town.” I look at Tristram Edwards, my ever patient editor and sigh, the two of us have been locked in the edit suite for what seems like weeks and I’m certain he would love a break from my pixel, pushing, perfectionism. In my head I’m already starting to make the mental step change from working with moving image to stills (my first love) and the prospect of photographing Karen Gillan. I’m aware she has just finished recording her last episode of Doctor Who and prior to becoming an actress she was a model. And only the other week I had watched her playing 1960’s super model Jean Shrimpton along side Aneurin Barnard’s David Bailey in John McKay’s excellent film “We’ll Take Manhattan”. McKay and Gillans’ second collaboration is a new movie that is about to start shooting called, “Not Another Happy Ending”. And the producers at British Film Company would like pictures of Gillan as ‘starlet in Cannes’, to accompany the press release.

24 hours later and I’ve swapped the cramped editing suite in London for a ten bedroom Villa with huge pool in 30 degree heat overlooking the luxury yachts of Cannes harbour. The Villa was once owned by the late record producer Micky Most (The Animals, Donovan, Lulu, Suzi Quatro, Jeff Beck etc)

I have no stylist, makeup artist, wardrobe or assistant, there simply hasn’t been time and I’m terrified the shoot is going to be complete disaster.

There’s a party atmosphere at the Villa and I get a very warm welcome from hosts Catherine and Steve Milne of the British Film Company as well as Director John McKay who offers to help assist. A film director is going to assist me? An effervescent and enthusiastic Karen Gillan is pouring over her wardrobe; several outfits are laid across the sumptuous mezzanine floor of the Villa, all hastily picked up in the UK before she left. Some of the designers I know and have worked with in the past, specifically Glaswegian Jonathan Saunders. Although the wardrobe is very limited I’m reassured by Gillan’s choice and also her awareness of herself as brand ‘Karen Gillan’. At 24 she has taken control of how she will be seen and the image she would like to project. She is easy going and fun loving with a steely determination and self-control and I can’t help but be impressed. Despite the challenges I feel very fortunate to be here and working with such a likeable and talented actress.

The team have dinner together on the patio and like so many times in my career, this is like an out of body experience. Cannes regulars, Catharine and Steve Milne are hosting several parties and attending screenings at the festival but it’s Karen Gillan’s first trip to Cannes and she is understandably very excited. I’m acutely aware that whilst I need to shoot pictures of the actress and fulfill the brief, I also should give her the space to enjoy this trip. After three hugely successful years, travelling amongst the stars, as Doctor Who’s assistant, Amy Pond, she is about to become one herself and a big screen one at that. Not that she isn’t already well known. Earlier that day she had opened a new twitter account and was battling with her Blackberry’s 60,000, and counting, new follower notifications.

Next day, and after some frantic phone calls, we manage to find a makeup artist who I’ve worked with before, who is also in Cannes. Ginni Bogado, is with the cast of Wes Anderson’s new movie, “Moonrise Kingdom”, and between doing the makeup for Bruce Willis, Edward Norton and Bill Murray’s press calls, she is dropping in on our shoot. Director (assistant) John McKay, Karen and I discuss ideas. Usually there are days and sometimes even weeks to plan a shoot and when I walk onto a set or location, I pretty much know exactly what I am doing. Not so here. We wing it, working with whatever we have to hand, as well as our collective experience, which somewhat strangely leads us to a hosepipe. We decide to drape the pipe around Karen like a snake, and the rest of the team look on as I lay under a large piece of plastic as she sprays me with water. I smile as I think about the phone call with my wife later ‘what did you do at work today darling?’. The results are ‘unusual’ and worth the effort, if, for nothing else, than to get everyone comfortable working together. But it’s the villa and specifically its pool that I feel offers the most opportunities. We tirelessly work this location with mixed results until Karen ad-libbing lays face down on the diving board with heels in the air reaching out to touch the water. At the opposite end of the pool I shoot from water level with a telephoto lens whilst John uses a reflector for fill-in lighting. The water is like a mirror and to me at least this is a picture that has significance, her progression as an actress reflecting on her past, as well as reaching out as if to touch her future. As her index finger makes contact with the mirror like surface I shoot. The light is fading so we try several other locations around the villa, with varying degrees of success, from wide to close ups but none have the same impact and we wrap for the day.

Much of the business of Cannes seems to revolve around the parties and late that evening everyone heads off into town. I knew that I had to be ready to run around the quiet streets of Cannes at 7am, shooting reportage of Karen and that would be difficult after alcohol and just a couple of hours sleep, so I decline the invite and reach for my pipe and slippers.

The next day, to everyone’s’ credit, we still make the call time and Karen, John and Ginni (who isn’t needed by Bruce, Ed or Bill) and I head into town. The fear I had the previous day over my lack of preparation, leaves me on the second day, as this is all about working with what we have and being spontaneous. In essence we are shooting street reportage with a single subject. We start slowly at first and maybe it’s the partying or lack of sleep but there is a melancholy to the shoot. I welcome this as Karen appears vulnerable and at times shy which fits with the brief that I had set myself of a young innocent, undiscovered star in Cannes. Her wardrobe, bronze, yellow, beige and brown, a short silk skirt, wool jumper, leather rucksack, hat, flat shoes and classic Raybans is simple and allows her to be playful with the role. I can’t help but think there are Paddington Bear references, which is no bad thing given my aim.

Running ahead I shoot from low angles so as to reveal the classic palm trees and recognisable architecture along the promenade de la Croisette. At this time in the morning the streets are quiet, with the occasional passer by adding to the interest and intrigue. Camera on motor drive, we continue to shoot on the beach, crossing streets, through shop window reflections and then through the park Allée de la Liberté Charles de Gaulle, where we see a carousel and delighted both make a run for it. I’m reminded of the movie I had watched just two weeks previously, when Karen (Jean Shrimpton) is running around the streets of London and New York with Aneurin Barnards (David Bailey), and now it’s me running with her, camera in hand in Cannes… not exactly David Bailey or Anueurin Barnards but I’m here to take pictures just the same. We ride the carousel and she maintains a sultry connection with the camera and like all great models requires very little direction.

The shoot has been intense and after a couple of hours the town is starting to wake up so we head to the Café Poët on Félix Faure. I sit apart from the rest and look through the mornings work, then notice an empty table and chair to my right almost on the pavement, the road is full of mopeds and across the street is the ornate frontage of the Hotel de Ville. The scene is very French and crowds of people are starting to flock into town and the mêlée of tourists adds to the atmosphere. I quickly choose an appropriate lens, 24mm wide and then ask Karen to sit at the table adding a single coffee cup and saucer. As if on queue it starts to rain and the pavement becomes a watery mirror with the reflection adding depth and even more atmosphere. With effortless ease, Karen adopts an introspective demeanour that causes the onlookers to stare. Half a dozen frames later, I am happy and I call a wrap.