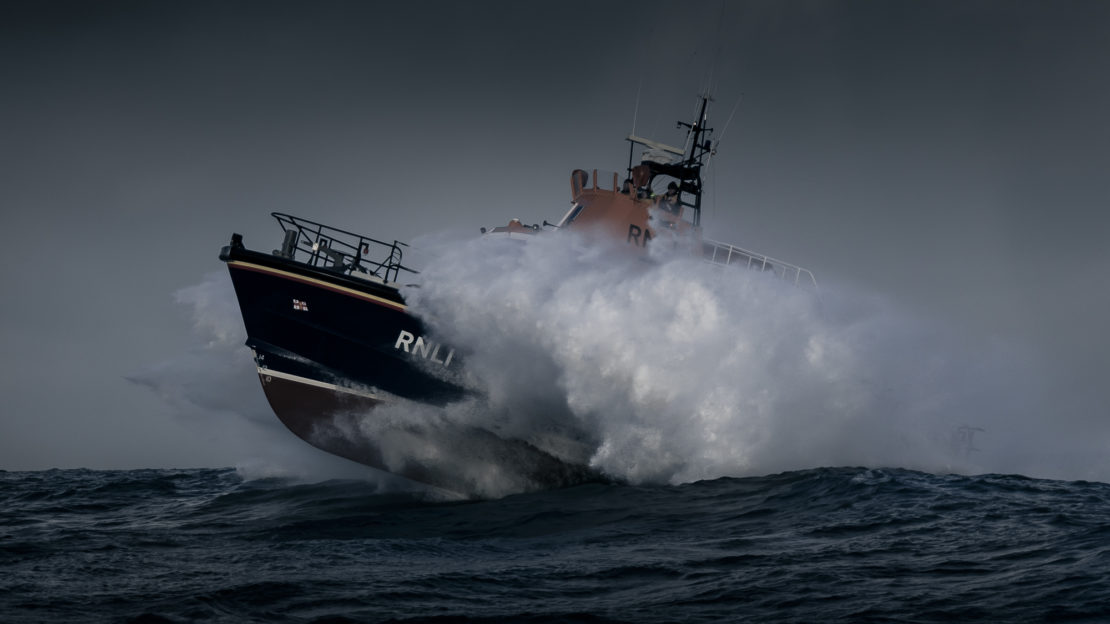 Saturday 21 February, 3pm. If you know my work then you’d be right in thinking that I’d be shooting a film or some form or backstage story at London Fashion week. Not this time… After an hour and a half of hanging onto the back of a 7m rigid inflatable speedboat, shooting pictures of an RNLI Severn class lifeboat as we shadow it in rough seas, I feel relieved to be cocooned in the warmth and comfort of its wheelhouse. Hydraulic seats soaks up the bumps as we cruise at 26 knots down the Sound of Islay to Port Askaig, on the west coast of Scotland, where the boat is stationed. I share a thought with the crew, made up of five men and one woman; of whom two are full time (the coxwain and the mechanic) and four volunteers. “Guess where I would usually be today?”, I ask and then explain. Laughing, they ask: “where would you rather be..?” “London Fashion Week” I reply, pause, then smile.”Sitting in this marvel of nautical engineering – more akin to an aircraft cockpit than a boat I feel as at home as I do in my own living room.”This is my second exercise with Islay RNLI and as well as shooting pictures of the boat in big seas, I’ve also been shooting portraits of the crew on station and at work.

This is a tight crew; there is good humour and the kind of banter that only comes from people who, quite literally, rely on each other for their lives.”

I first came to Islay in 1994, shooting a film about sailing and whisky – two things that I found are best left well apart. The story involved filming what was then an RNLI Thames class lifeboat and I stood on the deck of our tiny yacht mesmerised as this majestic boat sped towards us in the dusk of an autumn evening. What must it feel like to be rescued? This craft and its crew of mostly unpaid volunteers are all that’s between you and your God. It’s an incredibly humbling experience and one I never forgot. Seeing the boat heading towards me today brought back those same emotions, making the hair stand up on the back of my neck. I believe this boat, her crew and the RNLI can be summed up in a single word. The word epitomises that rarest and most precious quality of humanity: selflessness.

The Islay lifeboat and crew are part of a much larger project, which is to glimpse island life, culture and landscape through the medium of photography. No big crew, no lighting, no assistants, no hair, no makeup, and no wardrobe. Just me, an EOS 5DS and a handful of lenses. It’s pure photography that’s brought me here and although the technology is exotic, the end result is as old as photography itself; and that is to put ink on paper and make fine art prints.