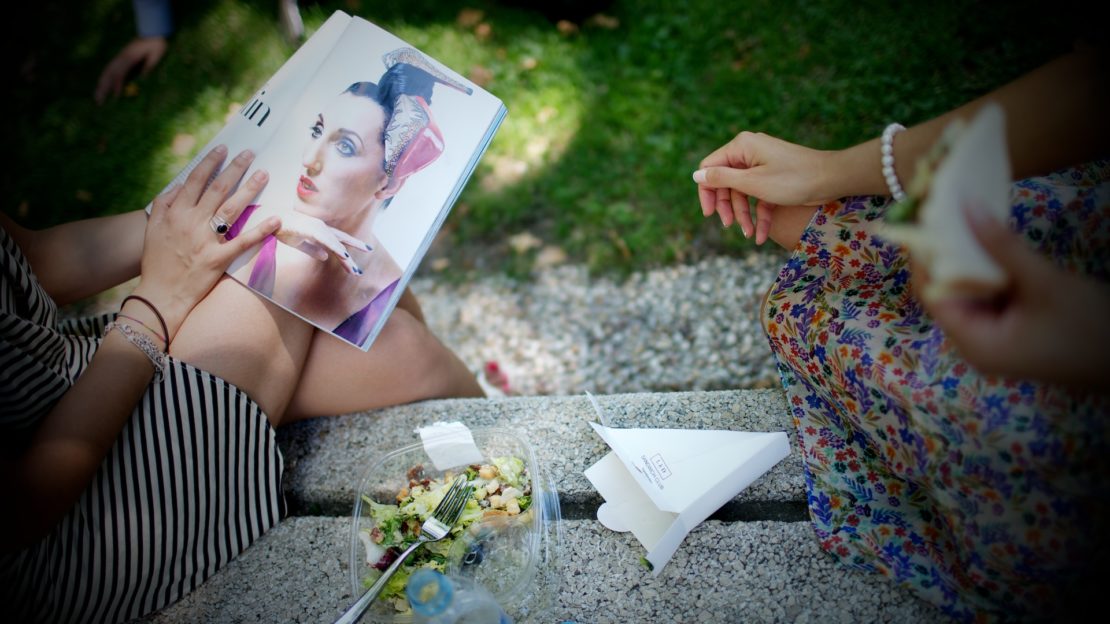 Ernst & Young (EY) employs 144,000 people, in 700 locations across 140 countries, providing assurance, transaction, tax and advisory services. It is one of the world’s best-known professional services firms and clients include some of the leading global businesses. EY has integrated 87 practices in Europe, Middle East, India and Africa into a grouping called EMEIA, which operates as a single region. The project began like most do, with a phone call. It was some time in March and the woman on the other end of the line asked if I would be interested in shooting a corporate project. A colleague had casually sent her a link to my website because he knew she was passionate about fashion. She had seen my backstage reportage from several seasons of fashion weeks, along with a couple of the short films I had made, and had decided that it was exactly what she wanted to illustrate EY’s new graduate recruitment initiative. At this point I had no idea of the scale of the undertaking but she went on to explain that we would photograph key individuals from around the world who would become case studies to help illustrate just what kind of people worked for her client. The pictures should be real and show people engaged in conversation, and they should be dynamic and aspirational. Several years ago, as a designer, I had had the idea of following individuals within business – ‘a day in the life” so to speak – to tell their stories through pictures accompanied with good copy. I had pitched the idea to several clients and all had decided against it for one reason or another. My own opinion was that to do this properly would require a huge amount of effort, enthusiasm and hard work; for most companies it just seemed too daunting and, most frustratingly of all, they couldn’t seem to see the value of this type of communication. However, I was now the one being given the opportunity to do exactly what I had thought would not be possible and, more importantly, I would be the photographer. For this reason I felt a tinge of excitement, knowing this project would be highly unusual and unique at such a large scale.

My agent and I discussed this new project and while it was a sideways move from my existing fashion, beauty and portrait work, it was also a big challenge and could open doors to all kinds of opportunities.

Since my friend and branding consultant, Andy Watt, had helped me to build a brand profile (Dispatches, February 2010) I have looked at every project and decided whether it is a fit or not. Andy’s ‘brand temple’ has served as my guide for the past 12 months and I always look back to the key words that Andy used to build the ‘brand pillars’. It was true that this new project didn’t tick every box, but it did tick a few of the key ones; after all Andy had even identified that it would be a good move to take what I do and sell it to corporate clients. So there it was, the decision was made, for my part anyway. So how do we photographers get jobs like this one? I suppose it can be categorised in this way. 1: Awareness. In this case via my website but also recommendation by a colleague (I should have a blog and am working on just that but it’s the eternal problem of being too busy to update both the website and blog and yet none of us can afford not to!) 2: The initial contact. Speaking with the client and continuing to deliver in words what they have seen in pictures; being capable of listening and understanding the brief, and hopefully making relevant, initial observations and recommendations with special emphasis on attention to detail and foresight. 3: Meeting face to face… which in my opinion is about the most important aspect of all my client relationships; seeing eye to eye and knowing that you are a person who can be relied upon and they can work with. 4: Knowing that you will deliver on your promises and ‘walk the talk’.

The person on the phone, Susanne Ballhausen, had been employed by SAS to help develop a creative strategy for, and art direct Ernst & Young’s new graduate recruitment campaign. Both Susanne and SAS have some very impressive credentials. Susanne has a passion for photography and has worked internationally as a creative director with key experience in brand application and interpretation in diverse markets, including Africa, Asia, the Middle East and Europe. She led the Nike brand articulation for retail outlets during the Sydney Olympics in 2000 and has more recently been involved in developing new approaches to brand photography and illustration for multinational corporations. SAS was founded in 1989 and specialises in design and marketing communications for such international businesses as Glaxo Smith Kline, Aviva, Diageo, KPMG, P&G, Sainsbury’s and The Coca-Cola Company. SAS says it seeks to create communications that evoke emotional responses in people, through a combination of great ideas, design, words and imagery. It’s one thing getting a new enquiry like this and it’s always great to hear enthusiasm for your work, but it’s a whole other matter when it comes to converting that enquiry into a job. For my part I always have a good idea of what I want to do and how I will do it. Sometimes this comes quickly and on other occasions it’s after several meetings with clients, art directors or even film directors. Where this project differed from previous work was in the logistics and organisation, which would need to be sustained over several months. For this I would rely on the experience of Mark George and his PA, Claire Blackmore, and I’m not really sure how I could do a job like this without them. Mark and I were invited to meet Susanne at SAS to discuss the project and how we intended to manage our part in this undertaking. Unbeknown to us, several photographers had already visited the offices and we were being scrutinised very carefully. Firstly, we explained how difficult it would be to walk into businesses around the world and photograph real people in real situations and come away with pictures to be proud of. Thorough research would need to be done on the individuals to be photographed (castings even) and the locations would need to be scouted. As I wanted the pictures to be atmospheric and, most importantly, look real, I fully intended to use available light wherever and whenever possible. So each country would need to have the flexibility to move their people around their offices to fit in with the lighting conditions at any given point during the day. If a location meant that I had no choice but to use additional lighting, then it was going to be continuous or reflected. I wasn’t going to use flash, so instead I’d plumped for tungsten and LED, which again would be heavy and would need to be set up in advance.

I also wanted to shoot with two camera bodies, along with prime lenses.Why is this important to mention? It’s time-consuming compared to just using a single body and zoom, but this would make the equipment heavy and too cumbersome for one person. So for all of this to work I’d also need another key ingredient, an assistant. Normally this is not an issue but when the client is sending an art director, photographer and assistant to 12 countries, then the air fares, accommodation and food budget start to play a big part in the overall cost. Mark and I knew that Susanne and SAS were seeing our point of view, we knew what we wanted and how to shoot it, but it would mean it had to be on our terms, otherwise we could simply not deliver. As this project would be a significant investment for EY I was invited to meet the team at the London head offices. On arriving early one Thursday morning I was immediately hit by the scale of Ernst &Young’s London operation. Up until this point all my communication had been via email and phone and on seeing the building designed by Lord Foster, the size of the project began to crystallise, along with a healthy dose of nervous excitement.

The meeting went well and we had a frank conversation about the approach, along with trying to work as far as possible within the ‘brand guidelines’ or ‘on brand’. Landor Associates in the US had produced a very tight set of guidelines which would be tough to follow, especially given the nature of our approach to these shoots, working with teams of EY employees in real situations trying to avoid too many set-ups. As a designer I had spent 20 years working with brand guidelines for such firms as Toyota, Boots,Waitrose, BA, adidas and LVMH, and so the language of design was in some ways as relevant in this discussion as photography. I was under no illusions, this meeting was another stepping stone towards being commissioned and EY wanted to be sure that I was the right person for the job. Both SAS and EY needed to be certain that we (photographer, assistant and art director) not only had the aesthetic and technical skills to take up this challenge, but just as importantly, that we had the people skills.When it comes to photographing people and especially those of different cultures from around the world, we would need to be patient, diplomatic, charming and yet still push to achieve our goal. So many times the technical aspect plays such a small part in the overall shoot, with the rapport between photographer and subject(s) being the vital ingredient to unlocking that special something that you hope has not been glimpsed before. Fortunately for me, EY agreed with SAS’s decision to bring me on board. I subsequently found out that both SAS and EY had been reading my Dispatches and this had helped them to get a clear understanding of my approach and thinking processes and, to some degree, passion for the profession. This in turn contributed to the final decision to commission me to do the shoot.