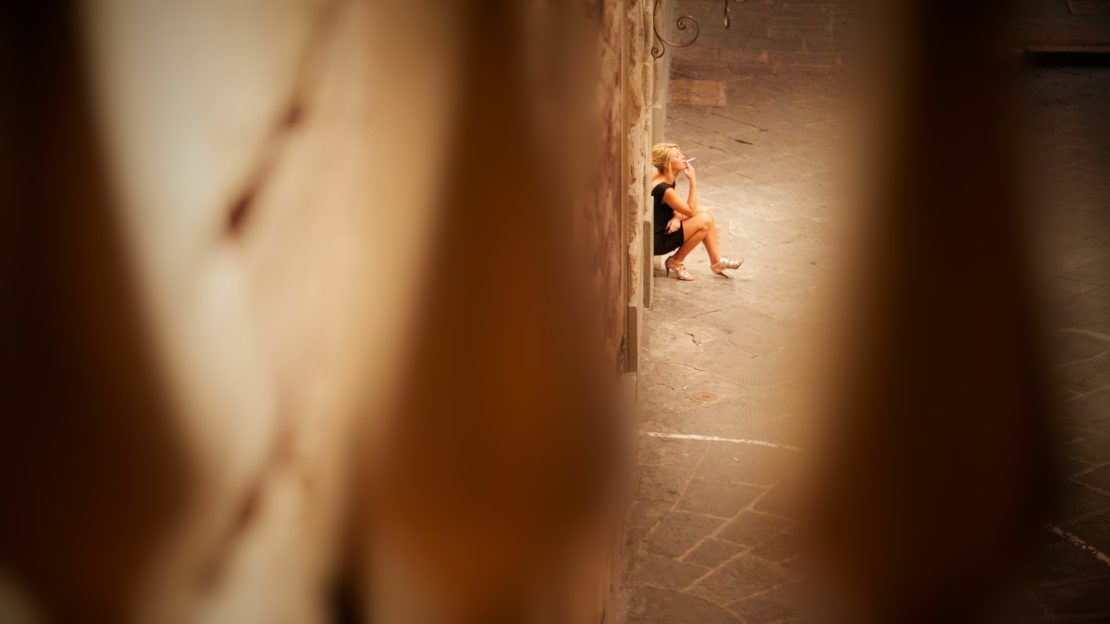 It’s 8.30 on a beautiful August morning in Florence. Are we having a breakfast of fresh fruit and croissants with coffee on the rooftop garden of the hotel, overlooking the city as it wakes? Are we lying in a sumptuous bed, contemplating the day ahead with the sun streaming through the wooden shutters? Or are we setting off to a vineyard to enjoy a stroll through the Tuscan countryside, followed by a light lunch with a glass of Chianti Classico? No, we are standing in a queue with what feels like several hundred others to see Michelangelo’s sculpture of David [in the Accademia Gallery]. I don’t like queuing. I mean, I really don’t like queuing. Even if there’s just one person at a cash machine, I’ll walk half a mile to find another one. I know I’m digressing, but why is it that as soon as I get within a few metres of an available machine, someone appears from nowhere just in front of me?

I know it’s often best to position myself in a great location and let the pictures unfold around me. I’ve always been amazed at the candid nature of the pictures this produces as people become accustomed to the fact that you are there.

So, what has this got to do with photography? Well, when you have a camera, every situation has its opportunities and rather than see the queue as a chore I decided to see it as a challenge – which was to try to capture moments (candid moments) of the people both in the queue and walking past it. This was made slightly more difficult as I had my hardly inconspicuous Canon EOS 1Ds MkIII, along with the 85, 50, and 35mm primes tucked into a Lowepro Classified 160 bag. I’ve always had a fascination with photojournalism and latterly street photography, or real-life reportage as it is sometimes called. I have huge admiration for the men and women who create incredibly beautiful and utterly enthralling, timeless art, from what most of us would consider, at best, to be average subjects. Of course, the grandfather of ‘the decisive moment’ is Henri Cartier-Bresson. …“There is a creative fraction of a second when you are taking a picture. Your eye must see a composition or an expression that life itself offers you, and you must know with intuition when to click the camera. That is the moment the photographer is creative.” Henri Cartier-Bresson. Great advice for all of us and it applies as much to the studio as to the street. But it’s the street that I am on, this fine Thursday morning, and my curiosity and drive to make a good picture is pushing me out of the queue and into the melee. My wife Mari stands ever patient and supporting, watching as I start to push the camera and myself into everyone’s line of sight. At first I shoot past people; after all, just about everyone has a camera and at times it looks like I’m shooting a view or a piece of architecture. Sadly, this technique is simply not giving me what I am looking for and so I opt for Plan B.

Plan B: As well as Cartier-Bresson’s ‘candid moment’ photography, the photojournalist will simply point his or her camera straight at the subject and shoot. As an Englishman trying to photograph street photography, I find Plan B doesn’t come easily and needs practice. Don’t get me wrong, when I’m commissioned to shoot I have no problem with pointing my camera at whoever is going to give me a good picture. But they know they are there to be photographed and that’s where the difference lies. Usually I am quite reserved and if you were to meet me at a party I certainly wouldn’t be dancing, especially not on the tables. I would be standing on the sidelines, perhaps chatting quietly to a friend or finding something immensely interesting to read on my iPhone, even if the battery were flat. Last year my friend Doug Menuez came to stay with us for a long weekend in Derbyshire. Through his fabulous corporate reportage Doug more than any other, inspired me to start a career in photography. Throughout the 1990s, he had unprecedented access to the digital pioneers of Silicon Valley such as Steve Jobs, Andy Grove, JohnWarnock, Bill Joy and John Doerr.We first met in San Francisco in 1993 when I was a graphic designer and we’ve been great friends and worked together many times since. I didn’t realise that Doug staying over would make such a huge impression on my work and I know that he would just laugh this off and say “Pah!” One Sunday afternoon we headed off with our cameras in hand (his a Nikon, mine a Canon), and as I live in the town where I was born and have spent the majority of my life, we would bump into friends and acquaintances every few minutes. I would say hello and Doug would shoot pictures. Sounds simple, doesn’t it? But he would walk up to people and just point his camera and shoot. It was like he had some kind of invisibility cloak. I waited for someone to be irritated by this behaviour but it never came, and when asked how he knew who to photograph and who not to, he just said: “Use your intuition.” Of course, after stealing each moment he would smile at the subject and often launch into a long chat followed by more pictures (really great pictures) of the very people I grew up with and see day-to-day. Ironically, most people were quite flattered to be photographed by this quietly spoken and yet flamboyant American. It was nothing short of an epiphany for me standing there with my £8,000 camera, feeling like I needed an invitation to my own party. Doug, like so many of his peers, was brought up shooting pictures in war zones, earthquakes and troublespots around the world. Two old ladies exchanging pleasantries outside the local church on a lazy Sunday afternoon in middle England was just another day at the office. It’s important to mention that both Doug and Cartier-Bresson were for the most part not looking to shoot like paparazzi, catching a celebrity unawares (as pleasant or unpleasant as that can be) but were looking to capture ‘the decisive moment’.Whether it was a candid shot with a Leica M3 covered in black tape (“a velvet hand, a hawk’s eye”– Cartier-Bresson) or slightly more constructed as with the photojournalist, both captured a moment and, as the subjects became aware of the camera, also affected it. Becoming aware is the key here, any more and the picture runs the risk of losing that initial impact. Most importantly these pictures, at their best, are both beautiful and tell a story in a way only a photograph can, and in my opinion are the purest type of photography.

Back on the streets of Florence, and my perseverance was starting to pay off and my confidence was rising. I decided that this was a commission; I have commissioned myself to shoot and write about street shooting for my blog. This technique really helped; I would simply point my camera straight at complete strangers and smile when they stared back at me afterwards and, just as with Doug, no one said a word. This technique and change in thinking was just as much of a tool as any camera, and along with stealth, patience and, of course, timing I was able to shoot large ladies in see-through dresses with big pants and nuns pointing their mobile phone cameras skywards, along with street scenes of dancing, queuing and begging. So what else did I learn and how could I improve? As with commissioned work, especially backstage reportage, I know it’s often best to position myself in a great location and let the pictures unfold around me. I’ve always been amazed at the candid nature of the pictures this produces, as people become accustomed to the fact that you are there and as a result a kind of stealth is achieved. An angle finder can really help, especially when sitting in a bar or café with the camera on the table.You are looking down into the viewfinder and not behind it and so are less conspicuous. It’s no coincidence that a lot of real photojournalism is shot with rangefinders, because they are light, quick and silent, with an undeniable pedigree and history.

I suppose I could use a compact; maybe a Canon G12, which would undoubtedly give me better pictures and by that I mean content. But I would not necessarily have the quality of a big DSLR. My obsession is not only capturing the moment but doing so with the highest possible detail and, given the present 35mm technology, it will nearly always lead me to pick up the big camera rather than the small one. Another reason is that shooting candid street scenes is only part of the fun. I like to capture urban landscapes, shop windows and abstracts, making full use of the wide apertures of my Canon primes, which no compact or rangefinder can compete with. Even with the big camera, it’s not as much of a chore as you might think. I can slip it into my bag with just my favourite 85 prime and forget about it. Of course, this defeats the object, as the real street photographer will always have the camera ready to shoot and that is the most important part of this type of photography.You are, in effect, a hunter of the moment and so you must be ready to shoot in a heartbeat, be in the right place at the right time, anticipate what may happen next and look 10 steps into the future, using your judgment and instinct just as much as your camera.