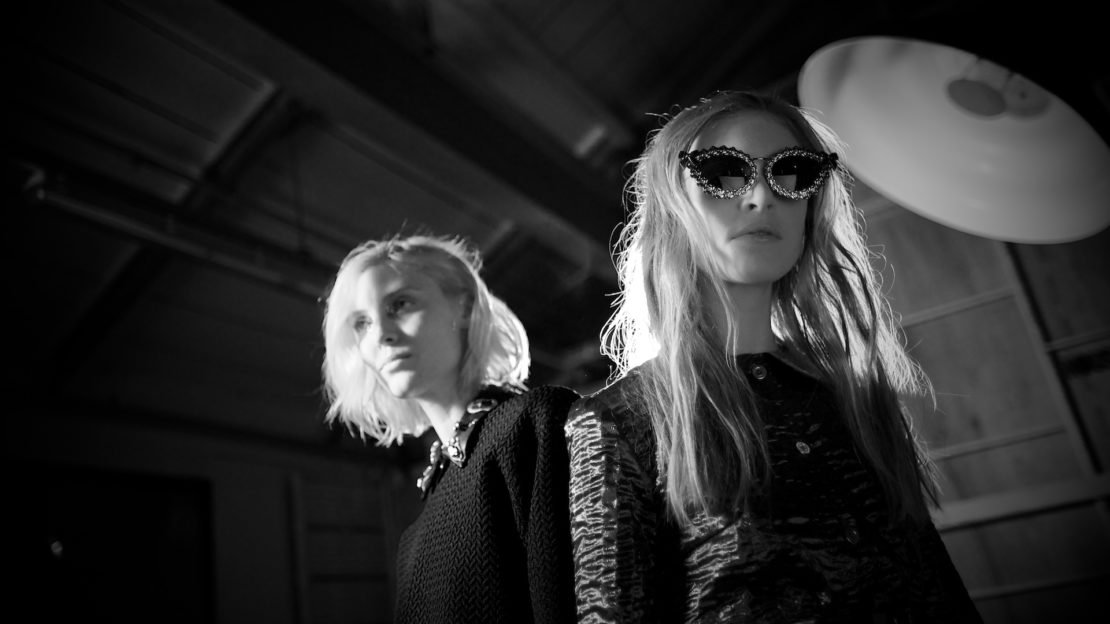 Article from Black+White photography magazine published June 2013: Working on a fashion shoot requires plenty of talent and an unwavering eye – but it also requires the very best equipment to carry out your vision. When Clive Booth shot the Autumn/Winter 2013 collection for Henry Holland, he had both to hand. Picture the scene: it’s the top level of a car park on Soho’s Brewer Street. There are rails of clothes; there are models, hair stylists, make-up artists; there are propped-up plyboard ‘flats’ and apparently discarded wooden fruit boxes; there is tape on the floor, banks of computer monitors, lighting equipment and film cameras. There are people everywhere. At the centre of this utilitarian scene is photographer and film maker Clive Booth. He is shooting the Autumn/Winter 2013 collection of fashion designer Henry Holland, and the concept behind the shoot was very much a meeting between two minds.

‘I wrote a treatment for the shoot, putting into words what I wanted to do, and Henry Holland bought into it straight away as, serendipitously, he’d had a very similar idea.’

‘I wanted it to have the feel of being backstage at a catwalk fashion show,’ Booth explains. ‘I wrote a treatment for it, putting into words what I wanted to do, and Henry Holland bought into it straight away as, serendipitously, he’d had a very similar idea.’ Despite the creativity behind the concept, this kind of shoot had a very specific commercial purpose: to produce a ‘lookbook’ (probably best described as a catalogue of everything in a designer’s collection). As such, the clothes have to take centre stage. ‘They have to be lit perfectly evenly and they have to look great,’ Booth says. ‘I brought in a beautiful Italian Mola softlight, both as a useable light and as a prop to give it the sense of being backstage, and I also used both continuous and flash lighting, as I was making a film, too.’ Many photographers would tackle such a shoot with a larger format digital set-up rather than a DSLR, but not Booth. For him, the Canon EOS 5D Mark III was the only tool for the job. ‘Because of its full-frame 22.3-megapixel sensor, it packs a hell of a punch and produces a 70Mb 8-bit TIFF,’ he explains. ‘You can pretty much use it for anything – it has more than enough resolution even for a 48-sheet poster.’ His main camera (‘Camera one,’ as he refers to it) was locked off on a tripod and fitted with his trademark Canon EF 85mm f/1.2L II USM prime lens. ‘That lens pops up all the way through my career,’ he reveals.‘You could argue I’ve built a career on it.’ Set at f/2.8, it allowed him to isolate the model from the background just enough to make her stand out, while keeping the subtle House of Holland branding perceptible. The camera was tethered to a Mac Pro system. The timetable of the shoot was such that Booth had a maximum of one minute with each model. ‘There wasn’t time for any problems – but the EOS 5D Mark III worked seamlessly, firing data through instantly and never faltering or freezing,’ he says.

As well as shooting the main images that would form the backbone of the lookbook, Booth used a second EOS 5D Mark III body handheld and fitted with a Canon EF 24mm f/1.4L II USM prime lens, to capture more reportage-style shots of the models and clothing in available light. A third body permitted him to shoot backstage in the hair and make-up area. Whatever style of picture he is shooting, Booth always operates from the same starting point: he shoots RAW, in Adobe RGB 1998 and usually at an ISO of 100 or 160 (although he may occasionally push that to ISOs of 800/1600 and above). ‘I then work out the lighting based on that,’ he explains. ‘I see it as optimising the camera in order to get the very best out of it.’ Because Booth works at such speed and at a shallow depth of field – when shooting with his EF 24mm f/1.4L II USM lens it is more often than not wide open at f/1.4 – it is crucial for him to have an autofocus system that is sensitive, reliable and accurate. ‘The focusing system of the EOS 5D Mark III is a giant leap forward,’ he enthuses. ‘I set a custom function that allows me to move the point of focus around the frame and control exactly where it falls. It works incredibly rapidly – as it would have to, as I sometimes only have seconds to take a picture – and allows me to decide exactly where in the picture to point the viewer’s eye.’

For Booth, the image process does not end after any postproduction is complete – he is committed to making his own prints, too. For this, he uses the Canon imagePROGRAF IPF6300. ‘Where do you start with the alchemy of printmaking?’ he ponders, continuing with explaining the vital importance of monitor calibration, colour profiles and ambient light sources.Booth outputs all his files – whether colour or black & white – at 16-bit on this 24-inch 12-colour printer. ‘The printer has a 16-bit plug-in for Photoshop. It also has two black inks, to achieve deep, rich blacks when making monochrome prints. You can even measure what it costs to run the printer – you can account for every print and the amount of ink each uses.’ He continues, ‘I believe there’s even more of an alchemy with digital printing than there is in the darkroom. And, as a photographer, there’s no finer way of showing your work than on paper and saying, ‘‘That is how I want you to see my picture.’’ That is the way. Making prints is one of the best parts of my job.’ Booth has a quiet, considered yet infectious enthusiasm for his work. He says, ‘As a kid, all I could do was drawing and sport.’ It’s safe to say that taking stunning photographs can be added to that list.